The Fourth of July is all about tradition. Fireworks, hotdogs, cold beer, and in Texas, live country music and square-dancing. Beyond baseball and apple pie, there’s nothing more traditionally American than a good old fashioned picnic on Independence Day.
For Billy Bob’s annual 4th of July Picnic, we wanted to celebrate America’s birthday by creating a concert poster steeped in Americana convention. So, with an eye on tradition, and an ear on red-dirt country music, we began exploring the aesthetics of classic rock n’ roll posters for inspiration. 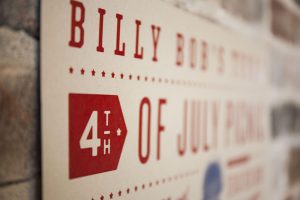 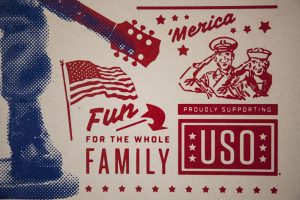 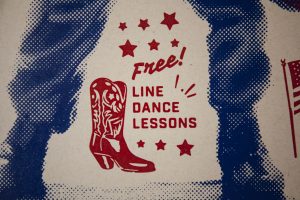 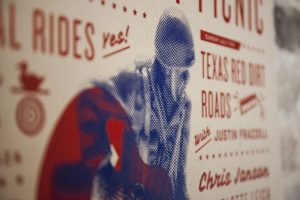 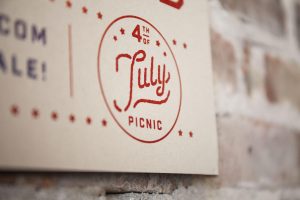 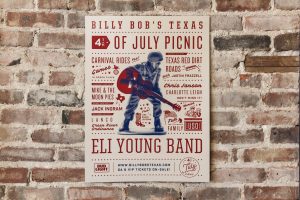 When rock n’ roll hit the scene, musicians needed a way to churn up local attendance to their shows without the help of the Internet, social media, or even a mature broadcast medium. Most musicians relied upon an artist to create concert posters that they could then pin up all over town to get eyes on their showtime. Early concert posters were illustrated by hand in two colors or less, and that’s the well from which we drew a lot of our inspiration. A lot of our influence came from the old Hatch Show Print style, which has been around since the late 19th century.
We chose to screen print the poster to honor the tradition of concert posters from the early 20th century, when screen printing was the most efficient and popular way of creating awareness for a touring rock n’ roll band. The poster was printed by Texas Graphic Resources, and done in two simple colors: red and blue. We printed a half-tone photo in blue on top of the solid red, which gives the poster more depth and dimension. Before photoshop, old-school screen printers used to practice this method to combine existing ideas without having to create completely new pieces of art.
We printed the poster on Neenah Environment Desert Storm 80# C – created by Neenah Paper. The heavier paper gives the poster a more substantial feeling, and the desert-craft color makes it look as if it could’ve been pulled from a collector’s library of classic concert posters, sandwiched somewhere between Buddy Holly and Bob Dylan.
The final result is a vibrant poster that features a blue soldier juxtaposed against a red guitar right in the center. The solider holding the guitar acts as the intersection between two American icons: celebrating Independence Day with music and joyous tradition, while also honoring the soldiers that made the ultimate sacrifice for our American freedoms.
As explorers, we often look forward to find the newest tools to help us accomplish a creative task. But, sometimes the nature of a project urges us to look back in time to find the right solution. For Billy Bob’s 4th of July Picnic, we journeyed back in time to create a memorable poster that celebrates the occasion with a rockin’ salute to the soldiers, music, and American traditions.